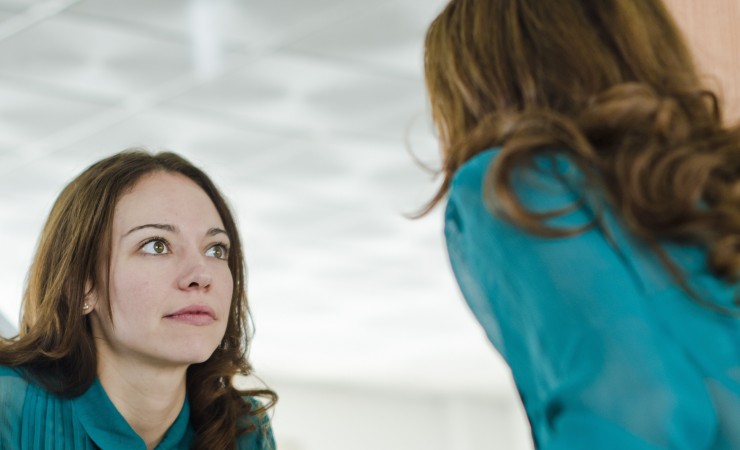 Before you Complain Look in The Mirror

“Are you the one who’s making soggy soap?!”

My husband asked, complaining as he literally moved around the room, getting closer to each of us, (me and my two sons), to look in our eyes and find the culprit.

We each shook our heads. It reminded me of the comic I used to read when I was growing up- Family Circus, where a parent would ask the kids who took the last cookie from the cookie jar, or who left the door open and they would all plead “Not Me.” And the cartoonist had drawn in this ghost-like character with a name badge “Not Me,” showing who was really to blame.

I get it. I’m not a fan of soggy soap either and I do my best to dump out the soap dish after my shower.

I decided to do my own little investigation about this complaint.

Who was making the soggy soap? And did this person have an accomplice??

My findings were a little surprising.

First, I noticed that I had to stop myself before getting out of the shower to remind myself to empty the soap dish.

Then I noticed my kids did leave a little bit of water in the soap dish, but not much (perhaps an indication of how much soap they use?)

It was the last piece of evidence that surprised me.

I had a shower after my husband and I saw that HE (the one that is complaining) was the one making the soggy soap. I even noticed it this morning, as a tiny little bit of softened soap was slowly transforming into mush.

I told my husband my findings.

He opened his mouth to protest, but he knew I wasn’t lying, so there wasn’t anything for him to say. So all he said was “Hmm….”

And I know I’ve done this too!

I have complained about my son leaving his tea bag in his tea cup and then leaving it on the kitchen counter, or WORSE in the living room. Then my husband piped up “Oh, I thought it was you doing it.”

Then I had flashes of many empty cups of tea where I have indeed done the same thing.

The thing is, is that whatever it is that we are witnessing in our world that is irritating us, that we want to complain about,  it is the exact thing that we need to work on in our lives.

And you may protest, saying that’s not true! I’m a neat freak and my kids’ chaos drives me nuts. I keep my stuff tidy- it certainly not me!? There is nothing I need to tidy up.

Ok, perhaps it’s not the tidiness that is the problem for you, so take a look at the BIG PICTURE. Perhaps it’s the emotion that sparks the complaining about mess that is what needs to be healed inside of you.

Maybe you are a neat freak because you had a mother like my friend, who would dump the clothes out of her drawers if she didn’t put her laundry away neat enough. There could be some anger and forgiveness that is still lingering around that part of your mother, and who you are being as a mother as a result of your up-bringing.

Our world is always a reflection of our inner state of being.

Before you complain, take a look in the mirror.

Sign Up to Attend This Live Call!
×
This site uses cookies to allow us to better serve you: Find out more.